MPEG-21 Media Value Chain Ontology (MVCO) may be used to capture « knowledge » about media value chains and to represent it in a computer readable way, concepts in the domain and the relationships between those concepts.

ISO/IEC IS 21000-19 represents in a standard way the Intellectual Property (IP) along the Value Chain, by means of different kinds of Intellectual Property entities, Actions and User roles.  In this context, there are different types of objects, also called IP Entities(Work, Adaptation, Manifestation, Instance, Copy, Product), and different actionsthat are performed on them (CreateWork, MakeAdaptation, MakeManifestation, MakeInstance, MakeCopy, Produce, Distribute, EndUserAction), and different users that can perform these actions according to their roles(Creator, Adaptor, Instantiator, Producer, Distributor, EndUser).

MVCO defines the relationships among Users, IP Entities and Actions as depicted in Figure 1. In this figure, the round boxes represent classes, and the arrows object properties (heading from domain class to range class).

In the MVCO ontology, permissions represent the transfers of rights. A Permissionrelates an IP Entitywith the transmitted right, the original and the new rights owners. Figure 2 shows the Permission model in MVCO: 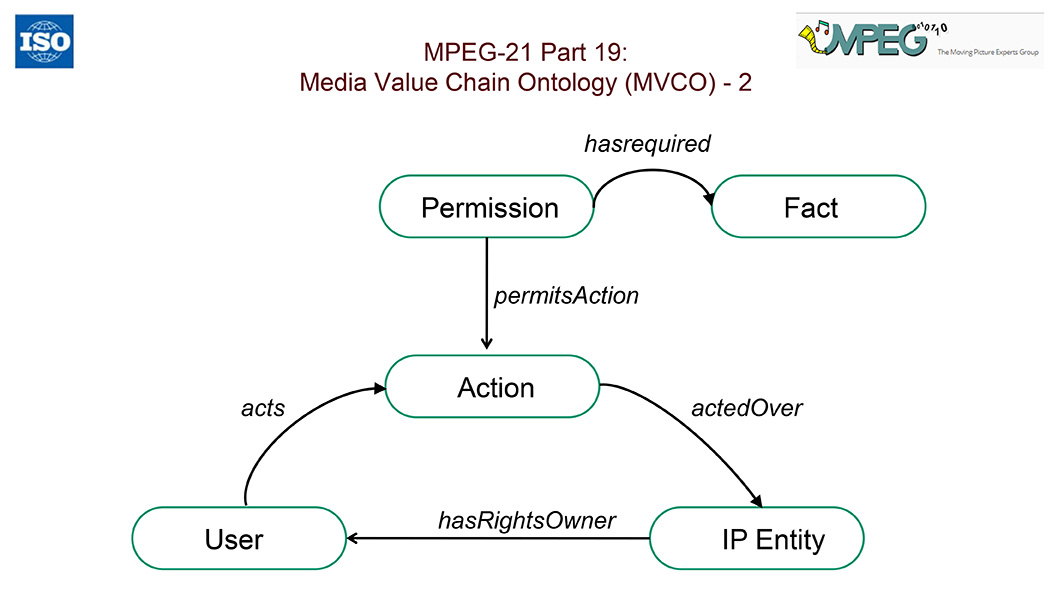 A Permission may require the prior fulfilment of conditions, and these conditions are represented as Facts. These Facts are general statements with a binary truth value, describing any constraint related to the context or the users.